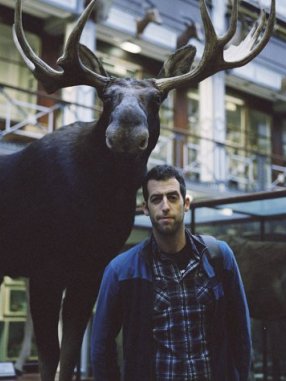 Nick was born at the very edge of North America and has slowly stumbled his way around the continent with only the slightest hint of rhyme or reason.

His early years were, well, boring. After high school and some college, he joined YWAM for 6 months in Denmark & Iceland before studying graphic design in Edmonton. He started a graphic design business, worked in construction, and delivered furniture, all the while pretending to be a singer-songwriter, resulting in a few albums and two near-disastrous tours throughout Canada. He currently has a new album ready for release, and as a result his car is scared for its life.

He met his lovely Iowan wife-to-be on a trip to New York, and immediately began a terribly long-distance and shockingly expensive relationship that led him to move to Nashville where she was attending college. He was lucky enough to marry her, and began working at Discover Worship shortly after, where he manages the website, the newsletter, the marketing materials, and the coffee. His firstborn son entered the world in July 2012, and sleep-deprivation has kept him from remembering much since then.

Stay up to date on the latest news, songs, and special offers by signing up for the newsletter!

Sign up and start downloading! It's super easy and crazy affordable!

If you only need an individual song - get 3 for the price of 1 for as low as $19 a month and you can cancel anytime!

If you need more, you can get THOUSANDS of songs that include demos, tracks, charts, and more for as little as $129 a year!